Emirates SkyCargo and Krix sounds like a winning partnership 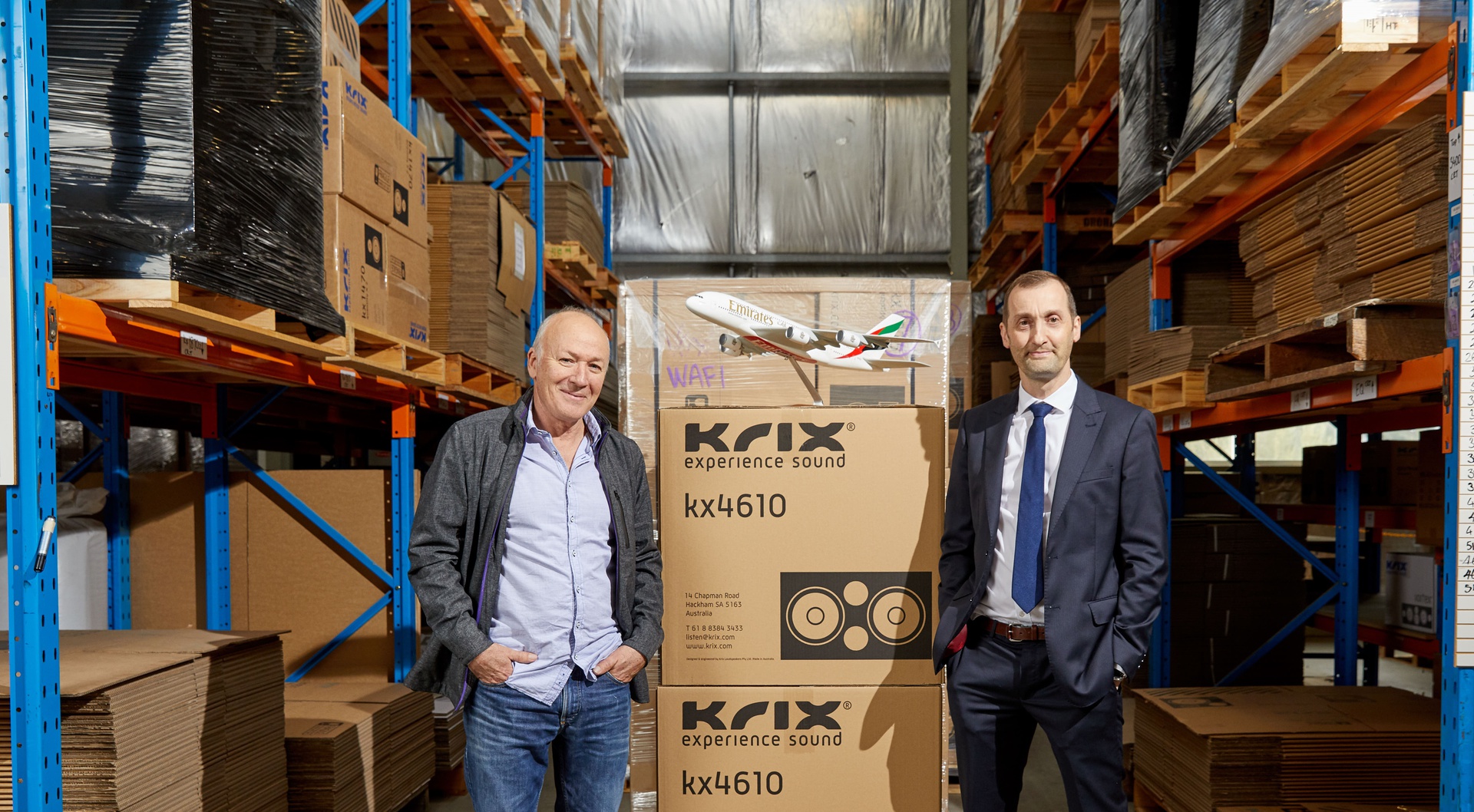 Dubai, UAE, 18 June 2019-  Emirates SkyCargo, the freight division of Emirates, has created growth opportunities for Krix, a family-owned South Australian business specialising in cinema and home-theatre speakers. Partnering with Emirates SkyCargo has allowed Krix to gain access to new markets in the Middle East, North Africa and Europe, growing its revenue while putting Australian products on the global stage.

Before its partnership with Emirates SkyCargo, exports made up 30 percent of Krix’s revenue. Today, export revenue has increased to approximately half of turnover.

“Being able to access the Emirates SkyCargo’s global network with its hub in Dubai has become an important factor in our growth over the past three to four years. We’ve been able to reach new customers throughout the Middle East, North Africa and Europe while supporting jobs in the Adelaide region,” said Ashley Krix, Commercial Cinema Sales Director of Krix.

Krix has exported its products to destinations such as Kuwait, Oman, Egypt, Lebanon, Bahrain, Saudi Arabia, Belfast and Oslo.

“Emirates SkyCargo has a proud history of enabling Australian businesses like Krix to continue to compete in today’s connected world. With one of the youngest and most efficient aircraft fleets and specialised air transportation services for industry verticals such as pharmaceuticals, perishables and automotive, Emirates SkyCargo has helped many Australian businesses reach out to existing customers across borders and also develop new markets for their products. We’re committed to offering our customers a superior service and Australian products are known for their quality around the world which is what makes this such a winning partnership,” said Jason Brown, Adelaide Cargo Manager for Emirates SkyCargo.

Emirates SkyCargo is an important facilitator of Australian exports. In 2017-18, the air cargo carrier transported close to 50,000 tonnes of exports from Australia including perishables such as meat, seafood, fruits and vegetables as well as pharmaceuticals. Over the last five years, the carrier has moved more than a quarter million tonnes of exports from the country.

While the freight service began carrying general freight from Australia, Emirates SkyCargo has expanded to offer specialised services that cater to the unique demands of Australian industries.

Emirates Fresh is the carrier’s specialised product which ensures that local produce and other perishables can reach overseas markets while maintaining their freshness. Emirates Pharma is Emirates SkyCargo’s offering for the rapid and secure transportation of temperature sensitive pharmaceuticals.

Emirates SkyCargo’s products are backed by state of the art infrastructure and equipment including over 25,000 square metres of dedicated temperature controlled storage space at two cargo terminals in Dubai and a fleet of Emirates Pharma and Emirates Fresh cool dollies which provide temperature protection for cargo when being transported on the ramp from the aircraft to the cargo terminal. The carrier also has a fleet of trucks, including reefer trucks, operating 24*7 between Dubai International Airport and Dubai World Central providing a seamless connection between connections on Emirates’ passenger and freighter aircraft.

Emirates SkyCargo has been connecting Australian businesses to the world since 1996.

The cargo service has also facilitated the transportation of priceless goods such as the First Fleet Piano from Sydney to London. In addition to transporting cargo in the belly hold of its passenger aircraft, Emirates SkyCargo also transports cargo on its freighter aircraft. The carrier operates a thrice a week freighter service to Sydney on its Boeing 777 freighter aircraft which has a capacity of close to 100 tonnes per flight.

Emirates SkyCargo and Krix sounds like a winning partnership