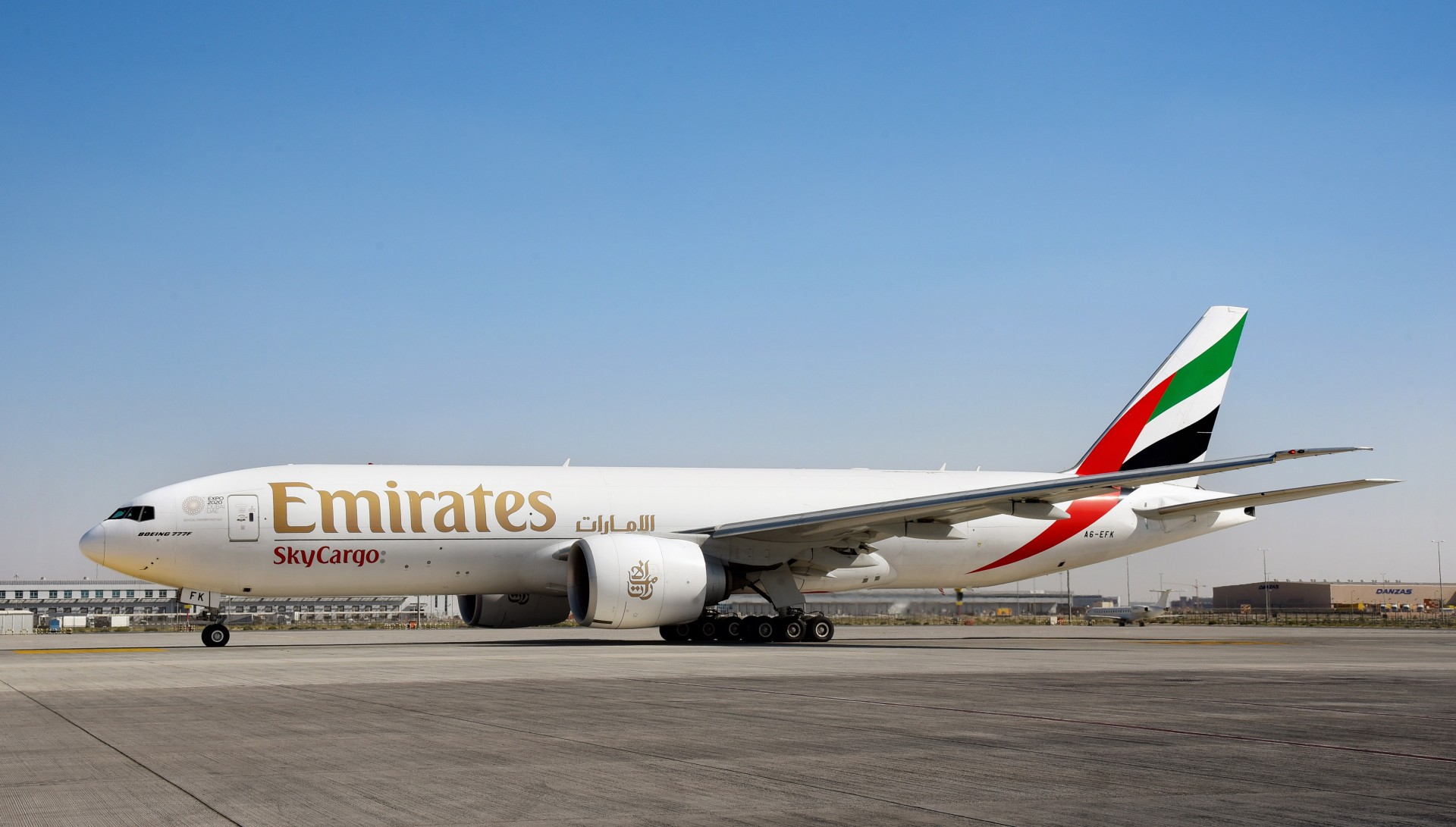 Dubai, UAE, 15 November 2021 - Emirates SkyCargo, a leader in the global airfreight industry, today announced that it will induct two new Boeing 777Fs into its fleet in 2022 and also convert four of the airline’s Boeing 777-300ER passenger aircraft into freighters between 2023 and 2024.

His Highness (HH) Sheikh Ahmed bin Saeed Al Maktoum, Chairman and Chief Executive, Emirates Airline and Group said: “The last two years have put the spotlight on the importance of supply chain connectivity and the availability of air cargo capacity to global communities and economies.

“Emirates plays a key role in making essential goods available to customers and consumers globally through the capacity available on our wide-body fleet, the reach of our global network, and the advanced infrastructure at our Dubai hub. Today, we are delighted to announce an investment of AED 3.6 billion (US$ 1 billion) to further expand our freighter capacity. This underscores our commitment to supporting our customers’ requirements, and reflects our confidence in our future growth and status as one of the largest airline cargo carriers in the world.”

Over the years, the Boeing 777 freighter has been a critical pillar of Emirates SkyCargo operations, with the aircraft operating scheduled and charter flights to destinations across six continents. The Boeing 777-F also played an important part of the carrier’s pandemic response, helping deliver vital commodities across the globe. The aircraft’s remarkable range and payload capabilities allow for time and temperature sensitive shipments to be transported rapidly and efficiently from origin to destination.

“We are honored that Emirates has once again placed its confidence in the 777 Freighter as the backbone of its global network,” said Ihssane Mounir, Boeing senior vice president of Commercial Sales and Marketing. “As the largest operator of 777 passenger and freighter models worldwide, Emirates’ success is a testament to the 777’s market-leading efficiency, improved sustainability and incredible range."

Emirates SkyCargo has signed an agreement with Israel Aerospace Industries (IAI) for the conversion of four Boeing 777-300ER passenger aircraft into full freighters. The agreement also includes an option for further Boeing 777-300ER conversions at a later stage. The conversion programme for the four aircraft will commence in early 2023 and is expected to conclude in 2024 with each aircraft taking up to an estimated five months for the process.

The converted freighters will provide up to 10 additional pallet positions over the Boeing 777-F production freighter allowing for transport of more low density cargo including e-commerce goods. They will boost the maindeck cargo capacity that Emirates SkyCargo can deploy on its global routes, with a particular focus on trade lanes where volumetric cargo loads tend to be high. The converted aircraft’s payload capabilities are very close to those of the Boeing 777-F production freighters and the twin-engine aircraft will be more efficient per tonne of cargo carried than the industry standard freighters.

“IAI is proud to partner with the brightest minds in the region to create solutions to the global demand for cargo aircraft,” said IAI CEO & President, Boaz Levy. “IAI’s Aviation Group, the world’s leader in cargo conversions, is currently converting the first B777-300ER aircraft, together with GECAS, in order to provide the most optimal solution for the rise in e-commerce. Emirates’ decision to select IAI for the conversion of its passenger aircraft to cargo configuration is a testament to IAI's professional capabilities and IAI’s longstanding international recognition in the field.”

In addition to its freighter aircraft, Emirates offers cargo capacity in the bellyhold of its passenger aircraft. During the COVID-19 pandemic, responding to the surging demand from the industry for the transportation of vital goods such as PPE, medical supplies and food in light of the overall reduction in global cargo capacity due to reduced passenger flight operations, Emirates SkyCargo introduced new measures including operating cargo-only flights on its passenger aircraft (passenger freighters) and modifying Boeing 777-300ER aircraft by removing seats from Economy Class to make additional room for cargo (mini-freighters). Emirates SkyCargo currently has a fleet of 16 mini-freighters.

Emirates SkyCargo operated more than 27,800 flights on its passenger freighters and mini-freighters in the one year period from March 2020, transporting more than 100,000 tonnes of essential cargo including medical supplies and food on these flights. With demand for air cargo capacity remaining high, Emirates SkyCargo continues to provide customers the option of transporting cargo on passenger freighters and/ or mini freighters.

Emirates SkyCargo is the airfreight division of Emirates. Through its state of the art hub in Dubai, Emirates SkyCargo transports cargo to over 140 destinations across a global network spanning six continents. The air cargo carrier offers customers cargo capacity on its modern fleet of all widebody Boeing 777 and Airbus A380 aircraft. For more information, www.skycargo.com

As a leading global aerospace company, Boeing develops, manufactures and services commercial airplanes, defense products and space systems for customers in more than 150 countries. The company leverages the talents of a global supplier base to advance economic opportunity, sustainability and community impact. Boeing’s diverse team is committed to innovating for the future and living the company’s core values of safety, quality and integrity. Learn more at www.boeing.com