Boarding pass for cargo: what flies on the Emirates seat?

Dubai, UAE, 03 June 2020- In the wake of the Covid-19 pandemic, countries around the world have witnessed an increase in the demand for essential commodities such as personal protective equipment and medical devices. However, with limited air cargo capacity available due to suspension of the majority of passenger flights, air cargo carriers have had to innovate to optimise capacity on cargo flights.

Since mid-April, Emirates SkyCargo has been transporting cargo on the seats and the overhead bins inside the passenger cabin of its Boeing 777-300ER aircraft. Placing cargo inside the aircraft cabin allows Emirates SkyCargo to transport more goods per flight, helping urgent cargo reach their destinations faster and allowing for more efficiency of flight operations.

However, Emirates SkyCargo also places utmost importance on safety and in order to continue safe cargo operations even with cargo being loaded inside the aircraft cabin, the carrier has laid out strict rules on the kind of cargo that can be flown on the seats and the overhead bins.

For example cargo containing liquids and valuable cargo are some of the goods that are not allowed to be loaded on the passenger seats and overhead bins. Most perishables such as fruits and vegetables also have to still be loaded in the bellyhold of the aircraft. However some exceptions include cut and preserved flowers and plants and dry and non-smelling fruits and vegetables which can be carefully packaged and loaded on seats or in overhead bins inside the aircraft.

Any cargo that is loaded inside the passenger cabin has to be packaged inside a suitable external container such as a plastic or cardboard box in accordance with the latest regulations outlined by IATA. In addition, Emirates SkyCargo requires that all packaging must be able to contain any damage to the cargo and include an internal absorbent layer.

“Emirates SkyCargo has operated close to 150 flights globally with cargo in the passenger cabin to date and the cargo that most frequently gets priority to be loaded on the seat and in the bins are medical supplies that are required urgently to fight against Covid-19. We continue to transport an important quantity of items such as face masks and shields, gloves, visors, protective suits and other similar items for individuals and healthcare workers across the world. These are also items that lend themselves to being packaged in boxes that can be easily loaded and secured on seats and in the bins,” said Henrik Ambak, Emirates Senior Vice President, Cargo Operations Worldwide.

Some of the other interesting and unexpected items that have been transported inside the cabin of the Emirates Boeing 777-300ER aircraft include garments and clothing, sporting goods, children’s toys without batteries, empty soap dispensers, bottle caps for personal care products, dental supplies and even dry food and spices such as pine nuts and cardamom in some instances helping keep the global conveyor belt for goods and supplies running.

Emirates SkyCargo continues to transport goods from more than 75 destinations across six continents, connecting people to the things they need most urgently, facilitating international trade and supporting local economies. 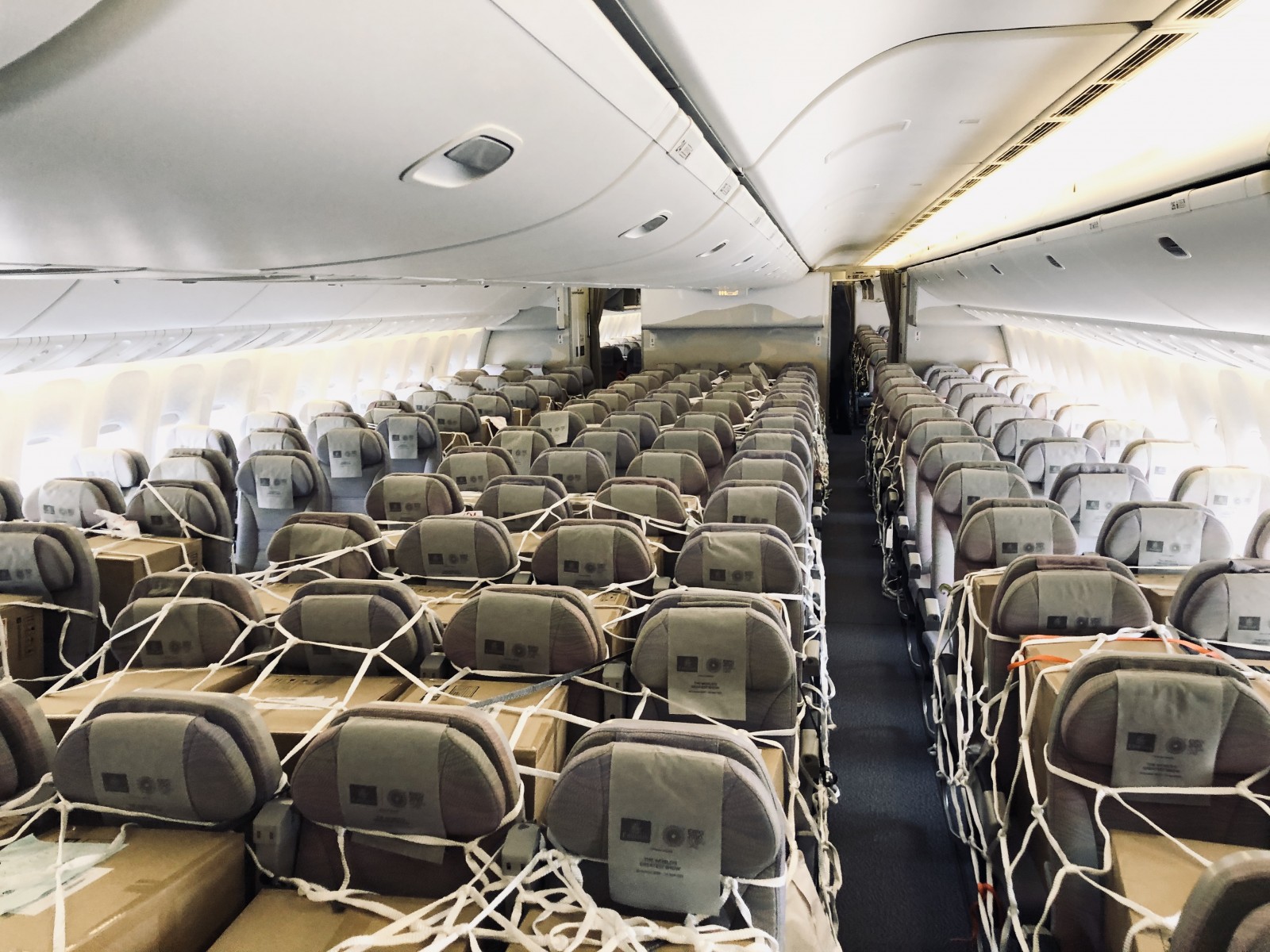 Boarding pass for cargo: what flies on the Emirates seat?